Recently I have been doing far more AppSec work in Agile, Lean environment. I also took the SANS SEC 540 course Cloud Security and DevSecOps Automation which has lots of really great exercises but I like to try to create some of my own examples.  In this one I wanted to create a CI/CD (Continuous Integration/Delivery) pipeline that integrates Static Analysis Software Testing (SAST) and Software Composition Analysis (SCA) and finally some Postman testing of API endpoints that include negative test (more on this later).

To start with I needed some example code so I found an example and adapted it to my own needs. The code along with the other supporting files like the Jenkinsfile can found on my GitHub under Planetary-API. Please note, I don't claim to be the best coder in the world :-)

I chose an API partly for simplicity of the examples and partly because there are things I wanted to explore further later in terms of bearer authentication and the use of JWTs (for another project).

The source code is fully contained within the app.py file. The API endpoint routes are shown below.

The next step is to enable the developer to get as much immediate feedback on the code as possible. Commonly termed shift-left this approach delivers as much security feedback as early in the process as possible by using IDE plugins or utilities that run on git commit/push using hooks into those operations.

I added the Pre-commit framework for managing hooks into the git operations. It's as simple as pip install pre-commit. Once installed you just need to configure what actions you want to take on a commit to the repo.

The first hook runs Black the Python Formatter which mostly fixes anything that might be found by the second hook. The second hook, Flake8 enforces style, preventing a commit if it finds any questionable formatting. Readable code is securable code.

Snyk in the IDE (scans Requirements.txt file for Python imports), and recently Snyk added support for Python Static Analysis Security Testing (SAST). Although Snyk is a commercial tool, it has a free tier that can be used by anyone.

The zoomed section of the PyCharm IDE shows the Snyk panel and the findings for dependencies and the first finding from code analysis. The Snyk Dashboard also provides a view of you vulnerable dependencies or all dependencies. 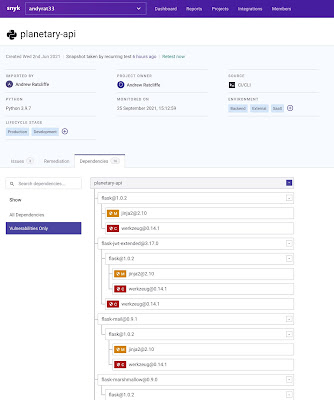 Snyk also provides a view on how we can remediate each of the findings. Snyk has more tricks up it's sleeve as we shall see later on.

Integrating security tools into the IDE either using plugins or by hooking into Git SCM brings these tools closer to the developer as they code.

Talisman checks for secrets and sensitive information and checks it does not leave the developers workstation and get committed to the repository. I have it installed as pre-push hook so that it does it's checks after commit but before anything is pushed to GitHub.

Black and Flake8 checks can also be seen passing as the commit happens. Talisman is called just before the code is pushed to GitHub and in this case preventing it from being pushed due to the findings.

Now that I have some security testing for code and dependencies in the  IDE, it's time to look at how to do all the testing during the pipeline build. As the pipeline brings together all of the development we want SAST and SCA to be run against the whole project. It's also the case that developers don't always use or take notice of the IDE plugins and Git hooks that they could and it's vital to uncover all of the potential vulnerabilities within the project for an overall understanding of risk.

Here I'm using Jenkins for Continuous Integration (CI) utilising the Blue Ocean Jenkins plugin which keeps all the configuration in a Jenkinsfile which means it's under source control just like the code.

The Jenkinsfile is loaded into the Blue Ocean plugin from SCM and the various steps configured in the Jenkinsfile execute. Blue Ocean produces a graphical representation of the pipeline and shows each step and it's associated output.

As can be seen some steps can run in parallel (the number of Jenkins build agents determines the maximum number) if they do not depend on the outcome of a previous stage. Here Run and SAST are running simultaneously. The build step checks out the source code from the repository builds the Docker image, creates the database and seeds some initial data.

The Static Analysis Security Testing (SAST) uses Semgrep in the pipeline with results shown in the Semgrep.io portal. Semgrep is also a commercial product with a very useable free tier. I have used more traditional SAST products that can be cumbersome to get started with and run. Semgrep is simple to get started with and I really like that the Rules are crowd-sourced and you can write your own. This makes building guard-rails to keep developers on a defined paved road by specifying specific function usage for example a lot easier.

Here is the stage from the Jenkinsfile:

As you can see Docker is used to run Semgrep as part of the build pipeline. The Semgrep Dashboard will contain the findings from the rules. In this case I'm just using the OWASP Top 10 ruleset. If Semgrep detects any problems the build will fail and stop. 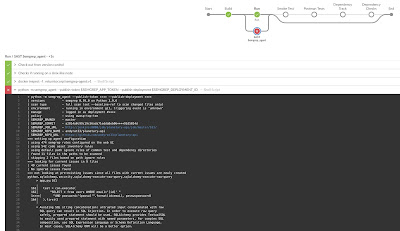 Once a security issue is found in the code the build pipelines ends. Before continuing, let's just have a look at the vulnerabilities I have found in the code.  There is a description in the output from the Semgrep build stage but the results are easier to read in the Semgrep Dashboard.

Semgrep Findings
Each vulnerability identified can be selected for a detailed description.

One of the things I learned in SANS SEC 540 course Cloud Security and DevSecOps Automation was to introduce Security Unit Testing for vulnerabilities.  As an illustration, I have created a number of Unit Tests using Postman for the Planetary API.  These tests are then included in the pipeline step using Newman and results are shown in the Tests tab in Blue Ocean. 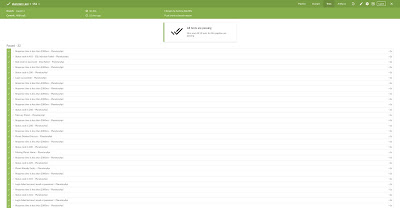 Most tests simply check for correct functionality in the API.  When I introduced vulnerabilities in the code I created tests that would FAIL if the vulnerability is present. To show this I will disable Semgrep from stopping the build when it detects an issue with the code. 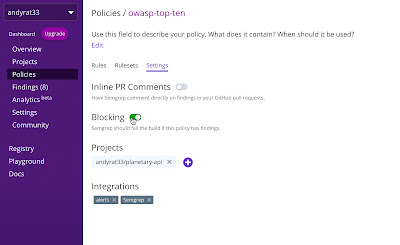 Once disabled the pipeline will continue to process the tests.

This time we can see that some tests have failed. Back to the Tests tab to see the details of the failures. 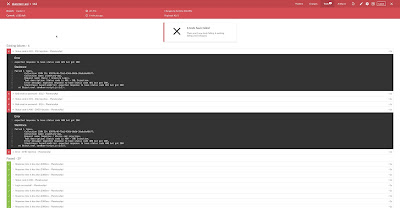 As can be seen from the screenshot above the tests catch both vulnerabilities I introduced into the sample code. Testing for SQL injection for AuthN bypass is very simple in this case.

For the tests themselves you want the reverse outcome to fail the test. In this example the tests fails if the SQL injection succeeds; get's a 200 OK instead of a 401 Unauthorised. 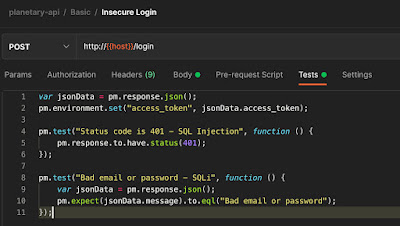 Both tests fail when SQLi is present, which is why we see two failures per example. The same is done for the command injection vulnerability.
Leaving the tests in place ensures the same issue cannot be reintroduced even if you do not have time to do a full SAST check as part of the pipeline for larger projects.  It can also be used in Postman by developers when they are changing critical code like authentication.
In fact I wrote most of the tests initially in the IDE using PyCharm HTTP Client (PyCharm Commercial version only) here's an example.
You could use Postman on the desktop or use this method in the IDE, either way, it allows these tests to become part of all of the changes you make before the code even get's committed to the repository.

One of the steps in the pipeline generates a Software Bill of Materials (SBOM) using CycloneDX which is uploaded by Jenkins to Dependency-Track. This provides both dependency tracking and license information as well as vulnerability information for any of the components. Dependency-Track is an OWASP open source tool that ingests the SBOM of a projects then automatically tracks dependencies for vulnerabilities. Once your SBOM is included in the project any new vulnerability that is announced will be picked up for your projects dependencies. It also shows the difference between the version used in your project and the current version available. 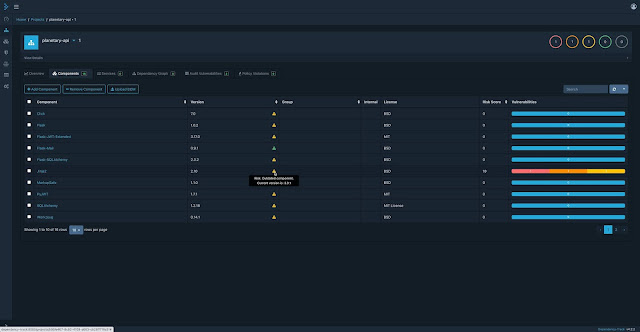 I imported a Manual Container Scan from Trivy  into DefectDojo, Trivvy examines all of the software contained in the Docker image that was created to run the API. There are a number of other vulnerabilities identified with the software used in the image. Ideally, this type of scan should also be included in the pipeline. 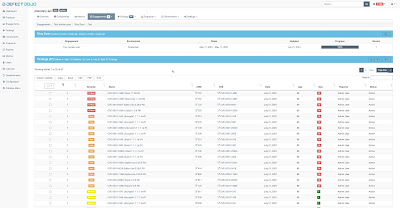 I mentioned earlier that Snyk had another capability and it can  also scan the Docker container image for vulnerable applications installed in the image like Trivvy.  I ran the following and manually imported it into DefectDojo.

Once that is done, I could have imported the scan manually into DefectDojo as well, however the results were similar to the Trivvy scan so it would have been duplication. Using a command line scan could be just as useful on a developer machine to get more direct feedback on the docker image without having to wait for next pipeline build. 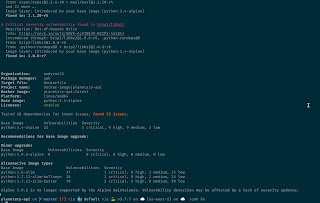 The Snyk vulnerabilities identified from the python requirements.txt have also been imported into DefectDojo and can be seen here alongside the ones imported from Dependency-Track during build pipeline.

They are similar but not identical. Snyk offering perhaps more advanced analysis and intelligence in terms of identification and impact.

This blog post is really only getting started in terms of what can be done to secure the applications and CI/CD pipelines, there is so much more that needs to be done on top of what is a very simple example; consider SEC540 if you'd like to know more. It has provided me with many hours of tinkering to get this far!

One of things that does seem to be gaining traction in the industry is the use of the Software Bill of Materials or SBOM. I think the day is coming where software companies may be required to handover this for inspection by prospective customers of their products.

This post is just my mind map for Richard Bejtlich 's excellent Defensible Network Architecture 2.0 . Please go read the original post for full details. This mind map just helps me visualise and expand each of the topics. I also find it useful to think about how things fit together and work together; this is shown in the linkages. The top level is numbered and runs clockwise which matches the priority numbering in the original post. MICCMAC 'mick-mack' Hopefully I will continue to update this as I re-arrange it and add more levels. You can download the XMind version my GitHub .
Read more