July 27, 2014
I recently came across a really neat Wireshark plugin for displaying IDS alerts inside of Wireshark. I find this a really useful way of doing historical packet capture analysis as I have the complete detail of the alert right there inside of Wireshark. I installed the IDSUtil on a VM running the Centrych Linux distro which I have found to be one of the most pleasant to install and use. Centrych, the IDSUtil and the Wireshark Alert plugin were all created by Jack Radigan and I highly recommend them to anyone who needs to do historical packet analysis.
There is a great demonstration of the Wireshark plugin and the IDSUtil here.
Once everything is installed and configured all that is required is to update the rules and then run the ids-pcap command with the packet capture:

Once the pcap has been read by Snort or Suricata the alerts are available in Wireshark when the same pcap is opened.

Where there are more than one alert for a packet each alert is shown. Setting a display filter of just 'alert' displays all those packets that have one or more alerts associated with them. I have set my display preferences to only use a single word for columns in Wireshark to make it easier to export packets as CSV. 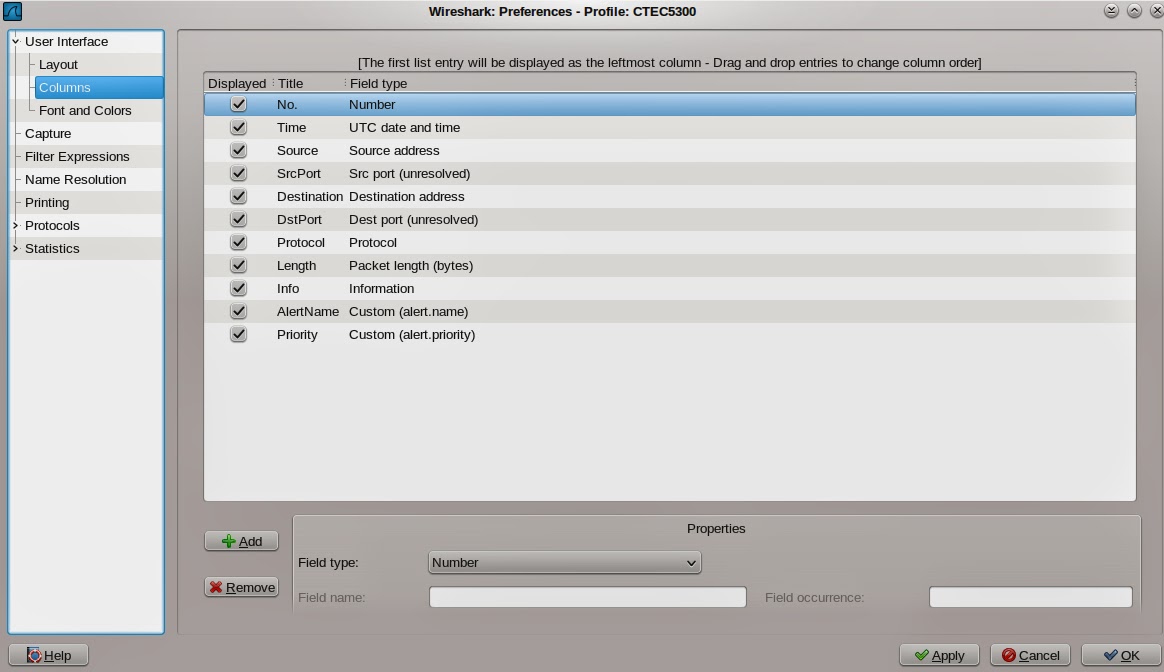 It's easy to export the displayed packets by selecting 'Export Packet Dissections' from the file menu in Wireshark. 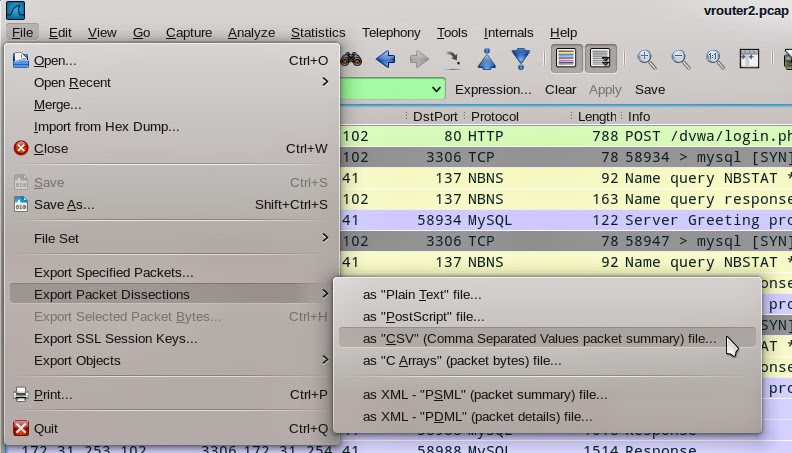 Leaving 'Displayed' selected provide a filename and click OK to save the file. 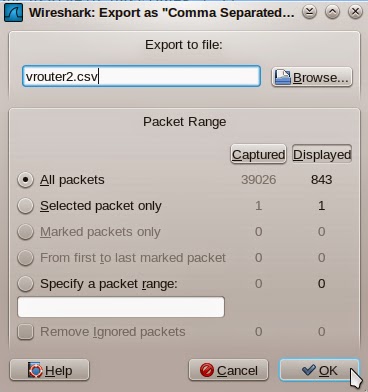 As in my previous post I can use Log Parser Lizard to process the output to make a Treemap of the IDS alerts. 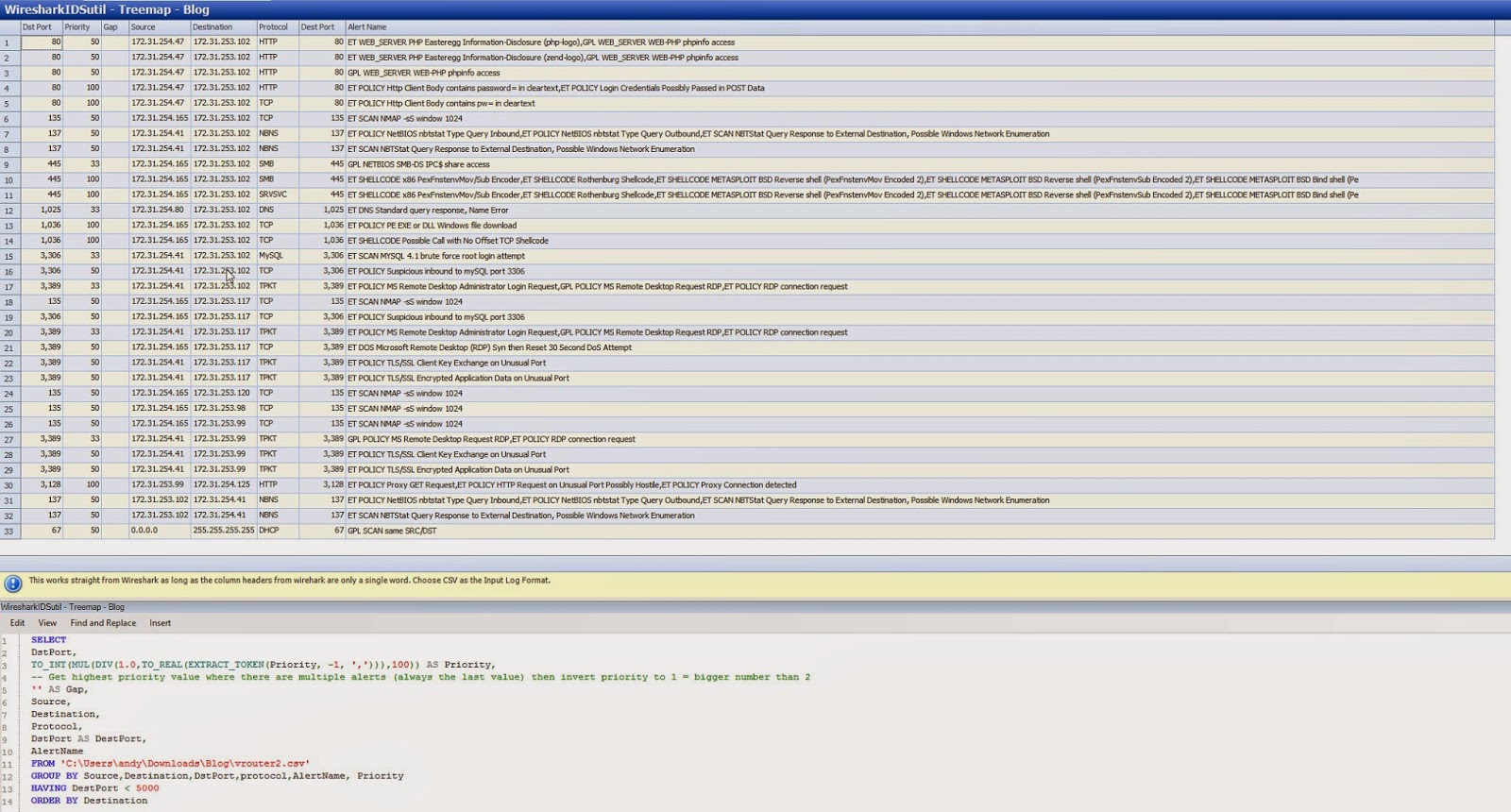 Export the file from Log Parser Lizard as TSV and use Notepad++ to edit the headers and add the data types for Treemap.

Then save as .tm3 extension and load the file into Treemap. 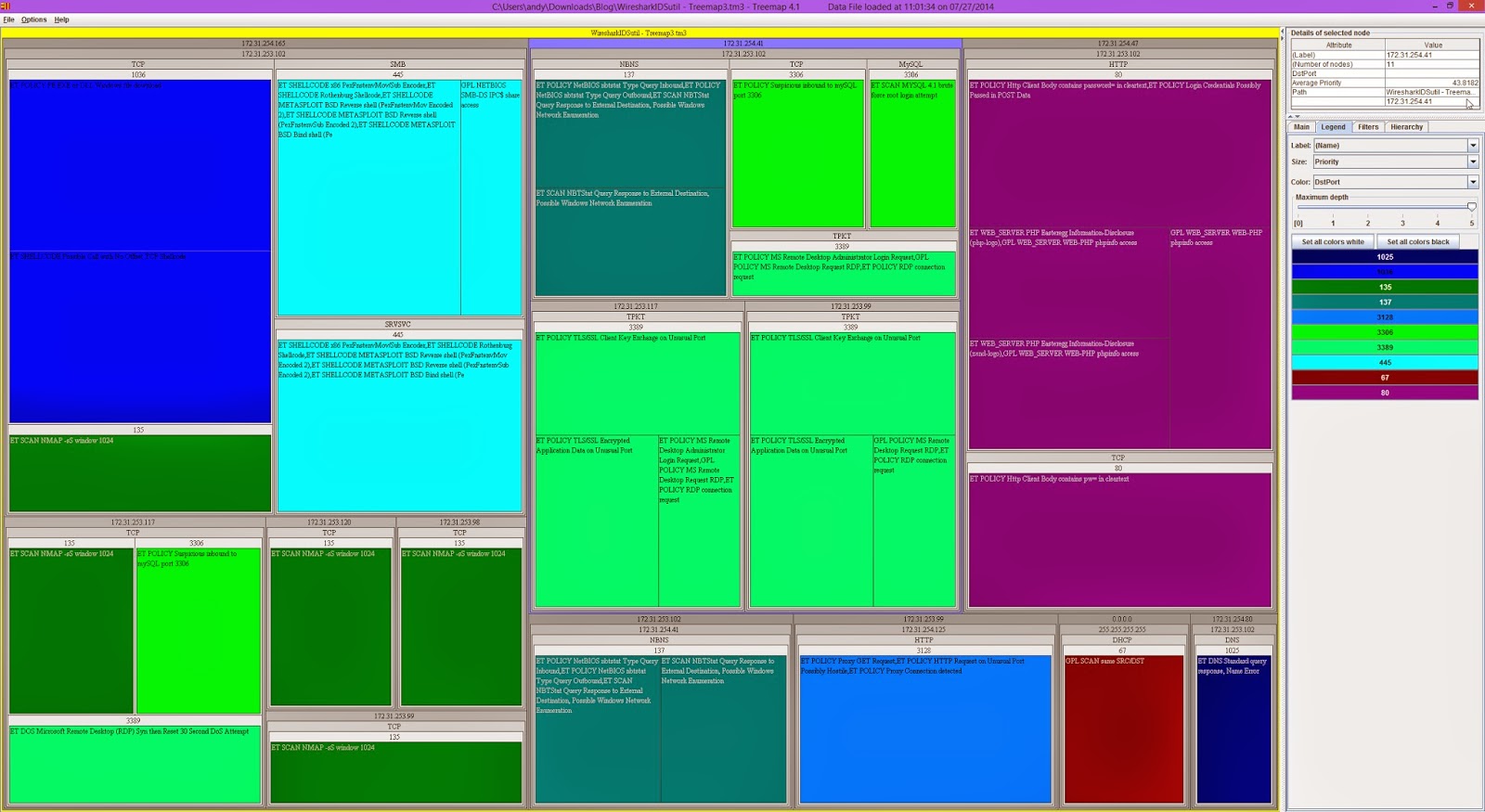 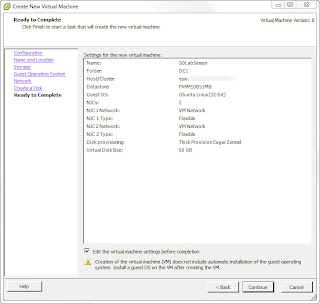 I’ve been using Security Onion  (SO) a lot lately, exploring the many great features of this awesome distro. Security Onion provides IDS either through Snort or Suricata as well as many other excellent network security monitoring tools such as Squert, Bro, NetworkMiner, Xplico, and many others. SO also has great open source IDS front end monitoring tools, Sguil and Snorby built in. I like using a VM on my desktop machine running Security Onion as my monitoring station, whilst deploying the Security Onion on my VMware ESXi lab server. I’m going to cover my test lab set up a little in this article for anyone interested in setting up their own.
One of things I love about using VMWare in the test lab is that gives you the ability to build a complete virtual network with different security zones, firewalls and IDS/IPS systems. Not to mention the fact that I couldn’t possibly have ten’s of servers deployed in my home office space, something I can easily do with just a couple of machine…
Read more

About netsa SiLKSiLK provides a way to capture netflow and interrogate flow data. It can be used for a variety of purposes including situational awareness, forensics and anomaly detection.
Installing SiLK Prerequisites Before installing SiLK examine the perquisites for the build. I’m using CentOS 6.3 minimal install with a virtual machine disk of 100GB in total with a separate partition for /data of about 60GB. The virtual machine will be allocated 4GB of RAM and 2 virtual processors. Configure the network settings for your lab environment. In order to use YUM for installing software the the lab system will require access to the Internet. Download the following source code files from the netsa CERT project home page
libfixbuf-1.2.0.tar.gznetsa-python-1.3.tar.gzsilk-2.5.0.tar.gzyaf-2.3.2.tar.gz Copy the required packages to the /usr/local/src directory. If you are using scp to copy over the packages dont’ forget ‘yum install openssh-clients’ first on the server. Start by updat…
Read more

Why tunnel SSH through a proxy server?An attacker could use this technique as an initial reverse connection or to enhance their capability once they have a foothold on a system. It allows an attacker to create an outbound connection using secure-shell (SSH) protocol utilising a proxy server to bypass firewall restrictions that would prevent native ssh port (TCP Port 22) reaching the Internet. Once an outbound connection via SSH is established a reverse tunnel can be created to provide the attacker access back into the environment using a graphical interface such as RDP or VNC.Tunnel out using a proxy serverSetup the tunnelThe Squid Proxy is configured to use the CONNECT method for HTTPS (SSL/TLS) only by default as it could not otherwise relay the encrypted protocol. The use of the CONNECT method is considered unsafe and generally the only port it would be configured for is 443So one thing the attacher must do, is to configure the end point SSH server to listen on port 443.Creating th…
Read more